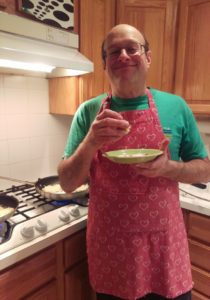 Not mine. My latkes taste like potato and onion. Like they’re supposed to. These are real, traditional Jewish potato latkes, from an actual jew. In fact, they’re better than traditional, since we’re going to use a little science to keep them from turning gray.

These are a beautiful golden-brown on the outside, white on the inside and taste exactly like they should.

Most of the recipes I’ve seen start with one pound of potatoes and claim to feed four people. This is complete nonsense.

We’re going to start with seven pounds of potatoes and this recipe will happily feed 8 actual, hungry adults.

So, without any more delay, here we go!

NB. I know it sounds weird to do the potatoes in the processor and the onions by hand, however it makes a big difference. The box grater makes smaller bits than the food processor and loses less onion liquid, and will produce better latkes.

Come back and leave a note if you liked it (or not!)