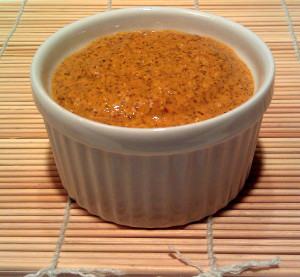 While it’s spicy, it isn’t nearly as spicy as it sounds, and has a ton of awesome flavor! The Sriracha is hot and garlicky, and the horseradish adds a little kick and some acid to balance things out.

This mustard grew out of my desire to have a spicy mustard that could stand up to a great cheddar cheese, hot-dog or salami, without overwhelming it, and without costing $5 for a tiny jar.

I had done quite a bit of research on making mustard and found all sorts of references to simmering, soaking, and otherwise fussing with the mustard seeds. I don’t have that much patience. So I kept on looking.

It turns out that a spice grinder (re-purposed coffee grinder) will nicely substitute for soaking.

Now, on to the recipe!

Where to buy the ingredients:

Spices can be insanely expensive if you buy them in the wrong place.

This recipe, for example, requires dried allspice berries. They’re almost impossible to find in any of the major grocery stores near me, and were extremely expensive in the places that did carry them. However just by chance, I tried Price-Rite and they had a half ounce package for less than $2, which is enough to keep me in mustard for at least a year. They seem to be less expensive and easier to find in grocery stores with a lot of Caribbean customers.

Mustard seeds are another one. They’re $8 for a little jar in Price Chopper, but $2 for 14 ounces in the Asian and India markets.

I was unable to find similar savings on the Guinness, however. 😎

Place the mustard seeds and allspice berries into the spice (coffee) grinder and grind until powdered and no visible chunks are flying around.

Put the spice mixture (above) into a blender. Add Guinness as necessary to keep the mixture smoothly flowing in the blender. Stop and check the consistency. It should be about the same thickness as store-bought brown mustard. Add more Guinness if too thick. Turn off the blender.

Squeeze in Sriracha to taste. I used a couple of tablespoons, but it depends entirely on your taste preference. Stop and taste, adding more if you like it spicier.

Add the turmeric, if desired. This helps with the traditional “mustard” color and a little bit of the flavor, but isn’t really necessary.

(optional) add sugar to taste. This shouldn’t be sweet, but a touch of sugar gives it a more “round” multi-dimensional flavor.

Transfer to a clean glass jar (I usually use a clean peanut butter jar) and refrigerate.

Makes about 18 ounces of mustard.